Researchers used a 4000-year-old hair sample to reconstruct an ancient human genome.An international team of researchers has reconstructed the first complete genome of an ancient human. The team—led by Professor Eske Willerslev and Ph.D. student Morten Rasmussen of the University of Copenhagen—analyzed a 4000-year-old hair sample from a Greenlandic man, who belonged to the Saqqaq culture of the New World Arctic.  The genome of the individual—nicknamed “Inuk” after the Greenlandic word for “man”—joins the ranks of just eight other complete genomes, and is the only one derived from a non-living source. The hair sample was unearthed from permafrost in the 1980s at Qeqertasussuk, on the west coast of Greenland, and had been in storage at the National Museum in Denmark. 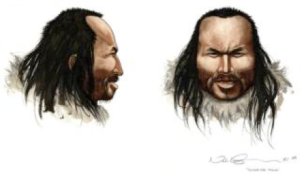 The hair sample used in the study, which was published last week in Nature, was a serendipitous discovery. Human remains of early Greenlandic peoples are scarce, and it was only through a conversation with a colleague that Willerslev found an appropriate DNA source. “I was speaking with [Natural History Museum Director] Dr. Morten Meldgaard when we started discussing the early peopling of the Arctic,” said Willerslev, in a press release. Meldgaard told Willerslev about the hair sample, which had remained largely untouched since its excavation in 1986.

The researchers created and amplified 12 DNA libraries for use with Illumina’s Genome Analyzer II next-generation sequencing platform, yielding a total of 3.5 billion reads. The team achieved an average sequencing depth of 20× across 79% of the human genome, which, the authors noted, is a marked improvement over the average 0.7× depth exhibited in other ancient DNA sequencing attempts.  The researchers used functional SNP assessment to determine some possible phenotypes from Inuk’s genetic material. Although such analysis is still “in its infancy,” wrote the authors, they consider it a strong likelihood that Inuk had blood type A+, brown eyes, and dark skin, as well as shovel-shaped front teeth and dry earwax—two characteristic traits of Asian and Native American populations.

After analyzing over 200 Y-chromosome SNPs, the team assigned Inuk to Y chromosome haplogroup Q1a, which is commonly found among Siberian and Native American populations. The work supports the notion that the Saqqaq people branched off from the Siberians around 5500 years ago via the Bering Strait, and that people migrated to the Americas from Asia in waves.

“Our findings can be of significant help to archaeologists and others as they seek to determine what happened to people from extinct cultures,” said Willerslev.

The study, titled “Ancient human genome sequence of an extinct Palaeo-Eskimo,” was published Feb. 11 in Nature.