An Italian painter of the High Renaissance in Venice. Giorgione is known for the elusive poetic quality of his work, though only about six surviving paintings are acknowledged for certain to be his work.

The resulting uncertainty about the identity and meaning of his art has made Giorgione one of the most mysterious figures in European painting.

The little known of Giorgione’s life is given in Giorgio Vasari’s Vite. The painter came from the small town of Castelfranco Veneto, 40km inland from Venice.

His name sometimes appears as Zorzo. The variant Giorgione (or Zorzon) may be translated “Big George”.

How early in boyhood he went to Venice we do not know, but stylistic evidence supports the statement of Carlo Ridolfi that he served his apprenticeship there under Giovanni Bellini; there he settled and made his fame. Contemporary documents record that his gifts were recognized early.

In 1500, when he was only twenty-three (that is, if Vasari is correct about his age when he died), he was chosen to paint portraits of the Doge Agostino Barbarigo and the condottiere Consalvo Ferrante. In 1504 he was commissioned to paint an altarpiece in memory of another condottiere, Matteo Costanzo, in the cathedral of his native town, Castelfranco.

In 1507 he received at the order of the Council of Ten part payment for a picture (subject not mentioned) on which he was engaged for the Hall of the Audience in the Doge’s Palace.

In 1507-1508 he was employed, with other artists of his generation, to decorate with frescoes the exterior of the newly rebuilt Fondaco dei Tedeschi (or German Merchants’ Hall) at Venice, having already done similar work on the exterior of the Casa Soranzo, the Casa Grimani alli Servi and other Venetian palaces. 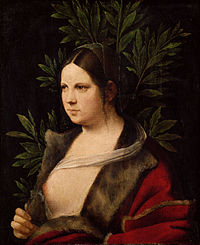 He was very closely associated with Titian; Vasari says Giorgione was Titian’s master, while Ridolfi says they both were pupils of Bellini, and lived in his house.

They worked together on the Fondaco dei Tedeschi frescoes, and Titian finished at least some paintings of Giorgione after his death, although which ones remains very controversial.

Besides altarpieces and portraits he painted pictures that told no story, whether biblical or classical, or if they professed to tell a story, neglected the action and simply embodied in form and color moods of lyrical or romantic feeling, much as a musician might embody them in sounds.

Innovating with the courage and felicity of genius, he had for a time an overwhelming influence on his contemporaries and immediate successors in the Venetian school, including Titian, Sebastiano del Piombo, Palma il Vecchio, il Cariani, Giulio Campagnola (and his brother), and even on his already eminent master, Giovanni Bellini. 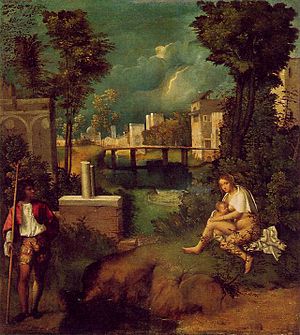 The Three Philosophers is equally enigmatic and its attribution to Giorgione is still disputed. The three figures stand near a dark empty cave. Sometimes interpreted as symbols of Plato’s cave or the Three Magi, they seem lost in a typical Giorgionesque dreamy mood, reinforced by a hazy light characteristic of his other landscapes, such as the Pastoral Concert, now in the Louvre. The latter “reveals the Venetians’ love of textures”, because the painter “renders almost palpable the appearance of flesh, fabric, wood, stone, and foliage. The painting is devoid of harsh contours and its treatment of landscape has been frequently compared to pastoral poetry, hence the title.

Giorgione and the young Titian revolutionized the genre of the portrait as well. It is exceedingly difficult and sometimes simply impossible to differentiate Titian’s early works from those of Giorgione.

None of Giorgione’s paintings are signed and only one bears a reliable date: his portrait of Laura (1 June 1506), one of the first to be painted in the “modern manner”, distinguished by dignity, clarity, and sophisticated characterization Few of the portraits attributed to Giorgione appear as straightforward records of the appearance of a commissioning individual, though it is perfectly possible that many are.

Many can be read as types designed to express a mood or atmosphere, and certainly many of the examples of the portrait tradition Giorgione initiated appear to have had this purpose, and not to have been sold to the sitter. The subjects of his non-religious figure paintings are equally hard to discern.

Perhaps the first question to ask is whether there was intended to be a specific meaning to these paintings that ingenious research can hope to recover.

Many art historians argue that there is not: “The best evidence, perhaps, that Giorgione’s pictures were not particularly esoteric in their meaning is provided by the fact that while his stylistic innovations were widely adopted, the distinguishing feature of virtually all Venetian non-religious painting in the first half of the 16th century is the lack of learned or literary content”