He was a Venetian painter and printmaker. He was prolific, and worked not only in the region of Venetia, one of Italy’s twenty regions, but also in Germany and Spain. 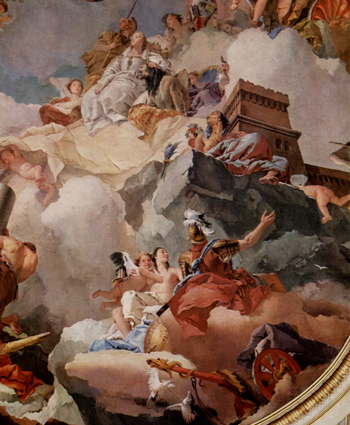 Born in Venice, Tiepolo was the youngest of six children born to Orsetta, Tiepolo’s mother and his father, Domenico Tiepolo, a sea captain. While the Tiepolo surname belongs to a patrician family, Giambattista’s father did not claim patrician status. The future artist was baptised in his parish church (San Pietro di Castello) as Giovanni Battista, in honour of his godfather, a Venetian nobleman called Giovanni Battista Dorià. His father Domenico died a year after his birth, leaving Orsetta in difficult financial circumstances.

Giambattista was initially a pupil of Gregorio Lazzarini, but the influences from elder contemporaries such as Sebastiano Ricci and Giovanni Battista Piazzetta are stronger in his work. At 19 years of age, Tiepolo completed his first major commission, the Sacrifice of Isaac (now in the Accademia). He left Lazzarini studio in 1717, and was received into the Fraglia or guild of painters. A patrician from the Friulian town of Udine, Dionisio Delfino, commissioned a fresco decoration of the chapel and palace from the young Tiepolo (completed 1726-1728). Tiepolo’s first masterpieces in Venice were a cycle of enormous canvases painted to decorate a large reception room of Ca’ Dolfin on the Grand Canal of Venice (ca. 1726–1729), depicting ancient battles and triumph.

These early masterpieces, novel for Venetian frescoes in their luminosity, brought him many commissions. He painted canvases for churches such as that of Verolanuova (1735-40), for the Scuola dei Carmini (1740-47), and the Chiesa degli Scalzi (1743-1744; now destroyed) in Cannaregio, a ceiling for the Palazzi Archinto and Casati-Dugnani in Milan (1731), the Colleoni Chapel in Bergamo (1732-1733), a ceiling for the Gesuiti (Santa Maria del Rosario) in Venice of St. Dominic Instituting the Rosary (1737-39), Palazzo Clerici, Milan (1740), decorations for Villa Cordellini at Montecchio Maggiore (1743-1744) and for the ballroom of the Palazzo Labia, now a television studio in Venice, showing the Story of Cleopatra (1745-1750).

By 1750, Tiepolo’s reputation was firmly established throughout Europe. That year, at the behest of Prince Bishop Karl Philip von Greiffenklau, he traveled to Würzburg where he resided for three years and executed ceiling paintings in the New Residenz palace (completed 1744). His painting for the grandiose Neumann-designed entrance staircase (Treppenhaus) is a massive ceiling fresco at 7287 square feet (677 m²), and was completed in collaboration with his sons, Giandomenico and Lorenzo. His Allegory of the Planets and Continents depicts Apollo embarking on his daily course; deities around him symbolize the planets; allegorical figures (on the cornice) represent the four continents Europe, Asia, Africa and America. He included a self-portrait beside a portrait of his son Giandomenico in the Europe section of this fresco. He also frescoed the Kaisersaal salon.

In 1761, Charles III commissioned Tiepolo to create a ceiling fresco to decorate the throne room of the Royal Palace of Madrid. The panegyric theme is the Apotheosis of Spain and has allegorical depictions recalling the dominance of Spain in the Americas and across the globe. In Spain, he incurred the jealousy and the bitter opposition of the rising champion of Neoclassicism, Anton Raphael Mengs.