He was an Italian artist of the Early Renaissane. To contemporaries, he was known as a mathematician and geometer as well as an artist, though now he is chiefly appreciated for his art. His painting was characterized by its serene humanism and its use of geometric forms, particularly in relation to perspective and foreshortening. Most of his work was produced in the Tuscan town of Arezzo. 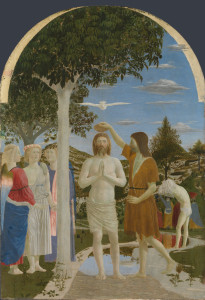 He may have learned his trade from one of several Sienese artists working in San Sepolcro during his youth. It is known that Piero apprenticed in Florence with Domenico Veneziano, with whom he worked in 1439 on frescoes for the hospital of Santa Maria Nuova (church of Sant’Egidio, now lost). He also knew Fra’ Angelico, who introduced him to the other leading masters of the time, Masaccio and Brunelleschi. In 1442 he returned to San Sepolcro where, three years later, he received the commission for altarpiece of the church of the Misericordia (including the Madonna della Misericordia), which he was to complete only in the early 1460s. In 1449 he executed several frescoes in the Castello Estense and the church of Sant’Andrea of Ferrara, also lost. His influence was particularly strong in the later Ferrarese allegorical works of Cosimo Tura.

Two years later he was in Rimini, working for Sigismondo Pandolfo Malatesta. In this sojourn he executed the famous fresco of Sigismondo Pandolfo Malatesta Praying in Front of St. Sigismund as well as the portrait of the condottiero. There he also met another famous Renaissance mathematician and architect, Leon Battista Alberti. Later he moved to Ancona, Pesaro and Bologna.      In 1452, Piero della Francesca was called to Arezzo to replace Bicci di Lorenzo in painting the frescoes of the basilica of San Francesco. The work was finished before 1466, probably between 1452-1456.

In 1453, he returned to San Sepolcro where, the following year, he signed a contract for the polyptych in the church of Sant’Agostino. A few years later, summoned by Pope Nicholas V, he moved to Rome: here he executed frescoes in the Basilica di Santa Maria Maggiore, of which only fragments remain. Two years later he was again in the Papal capital, for frescoes in Vatican Palace which have also been destroyed. To this period belongs The Flagellation (c. 1460), one of the most famous and controversial pictures of the early Renaissance. As discussed in own entry, it is marked by an air of geometric sobriety, in addition to presenting a perplexing enigma as to the nature of the three men at right forefront. Piero della Francesca is documented in Rimini in 1482. His will was made in 1487. In his later years, painters such as Perugino and Luca Signorelli frequently visited his workshop. According to Vasari, he went blind in old age.

His deep interest in the theoretical study of perspective and his contemplative approach to his paintings are apparent in all his work, including the panels of the S. Agostino altarpiece.

Three treatises written by Piero are known to modern mathematicians: Abacus Treatise (Trattato d’Abaco), Short Book on the Five Regular Solids (Libellus de Quinque Corporibus Regularibus) and On Perspective for Painting (De Prospectiva Pingendi). The subjects covered in these writings include arithmetic, algebra, geometry and innovative work in both solid geometry and perspective..